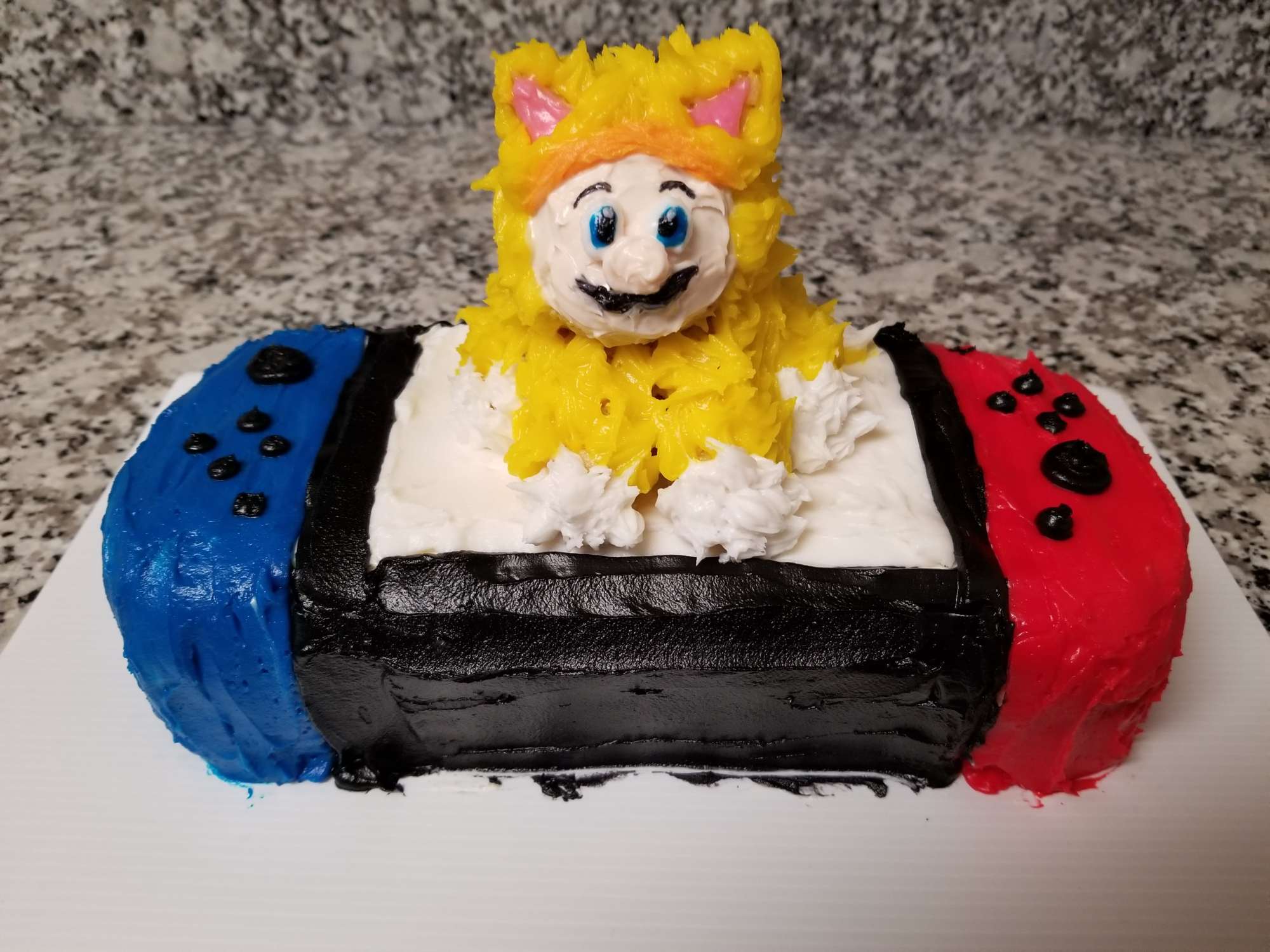 Hello everyone, Shelfy here with a new Krafty Koopa for you all! Get ready because we are making another Nintendo Switch cake today, except this time with a cute little Cat Mario on top! Let’s begin!

Step One: Baking the Cake and Pan Preparation

The first thing I did was to bake my cake according to the box’s instructions. It is important to know that I doubled my recipe! At first, I only used one box of mix and for whatever reason it baked extremely unevenly and it broke in half when I tried getting it out of my pan. I read up on Betty Crocker recipes online and there were some conflicting reports of whether or not one would need to double their recipe when using a pan as large as 9 x 13 x 2. Some websites talked about an ‘extender recipe’ that I had no idea what that was so I just mixed 2 two boxes after my first failed attempt and it worked well. You’ll probably have a lot of extra cake left over in the end but with this you could make the cake 3 layers tall if you wanted.

To prepare my aluminum pan I greased it with Pam Baking spray and lined it with a piece of parchment paper that stuck out of the sides so I could easily grab the cake. You might be safe with just the parchment paper so long as it covered all the sides of the pan and the batter didn’t touch but I figured it would be best to do both to make sure the cake would come out in one piece.

I put my doubled cake in the oven for about 45 minutes which was slightly over the bake time for one cake on the box but not by a whole lot. I mostly kept a close eye on it and made sure the cake was done by sticking a toothpick all the way in and once it came out clean it was done.

Once my cake was out of the oven and had plenty of time to cool I used my cake leveler to flatten the top. To use a cake leveler simply adjust the wire to whatever height you like, place both legs on your work surface, and slowly walk it through the cake. You’re pretty much sawing the top off the cake.

After leveling the cake, I cut two pieces of the cake to the size of an actual Nintendo Switch. I marked small approximation marks on my pan before I had baked anything so that I could just line up my pan next to my cake and have an estimated size. Next, I used a small layer of my standard vanilla frosting to adhere the two layers together and then stacked them up on one of my cake boards. I also placed a small dollop of frosting on the board to provide extra stability. I rounded off the edges just a smidge with a large knife and then began my crumb coat. This is basically a primary layer of frosting that goes on the cake to make your actual decoration layers of frosting stick well and have the colors pop a bit more. The cake was really crumbly while applying all this frosting so I just went slow and steady with it. After the entire cake was covered I put the entire thing in the fridge.

To make the Cat Mario that sits on top of the cake I essentially made dough for cake pops and sculpted it. First I crumbled up the top, uneven layer of my cake and mixed it with the standard vanilla. The general rule I have heard when making cake pops is that one cake made with one box should be mixed with one can of frosting. I estimated the amount of cake I crumbled to be about one-third of a standard box cake so I mixed in one-third a can of frosting. I rolled these into balls and let them chill in the fridge for at least an hour before I started sculpting.

When sculpting, I really tried to keep my shapes basic and not overwork the cake pop dough. Remember, our hands are warm and when shaping the dough it’ll get stickier and more likely to fall apart. I worked on another one of my cake boards for stability and adhered the small ear pieces with frosting. Every other piece just stuck together on its own. Once I had created Mario, I stuck him in the freezer for about 30 minutes before decorating.

Finally, it was time to frost and put on my final decorations! I started with the main Switch cake itself. I worked in sections somewhat working my way “inward and upward,” if that makes any sense. I started with the Joy-Cons; neon red and then neon blue. Next, I did a small white rectangle in the middle for the screen that Cat Mario would be sitting on top of. Finally, I finished off with black around the screen area and the small button details. As I frosted I used my flat tip to create stripes on the cake and then I smoothed the entire section out with a small dessert knife I found in my silverware drawer.

For Cat Mario’s frosting I first mixed a somewhat skin tone icing by combining my base frosting I used for the crumb coat with a small amount of pink and yellow. I used my small dessert knife to apply this and smooth it out. Next, I used my round tip to make the small amount of pink in Cat Mario’s ears. Then, I used my flower tip to create a sort of fuzzy effect. I began with the whites on the paws and then moved to the yellow sections.

For the face details, I used small amounts of frosting and toothpicks to shape everything appropriately. This took me quite a bit of time to do as my frosting was a bit “wiggly” during this process. It may help if you put the cake back into the fridge before working on the face to make the process slightly easier. I also went back and added the orange visor on top of Mario’s cat suit for extra detail.

Voilà! Your Switch cake with Cat Mario on top is done! Enjoy some sweetness!

Hi, I'm Emma! However, the internet recognizes me as Shelfy! I like Nintendo and grilled cheese and will usually be found creating some not-so-serious internet videos. View all posts by Shelfy