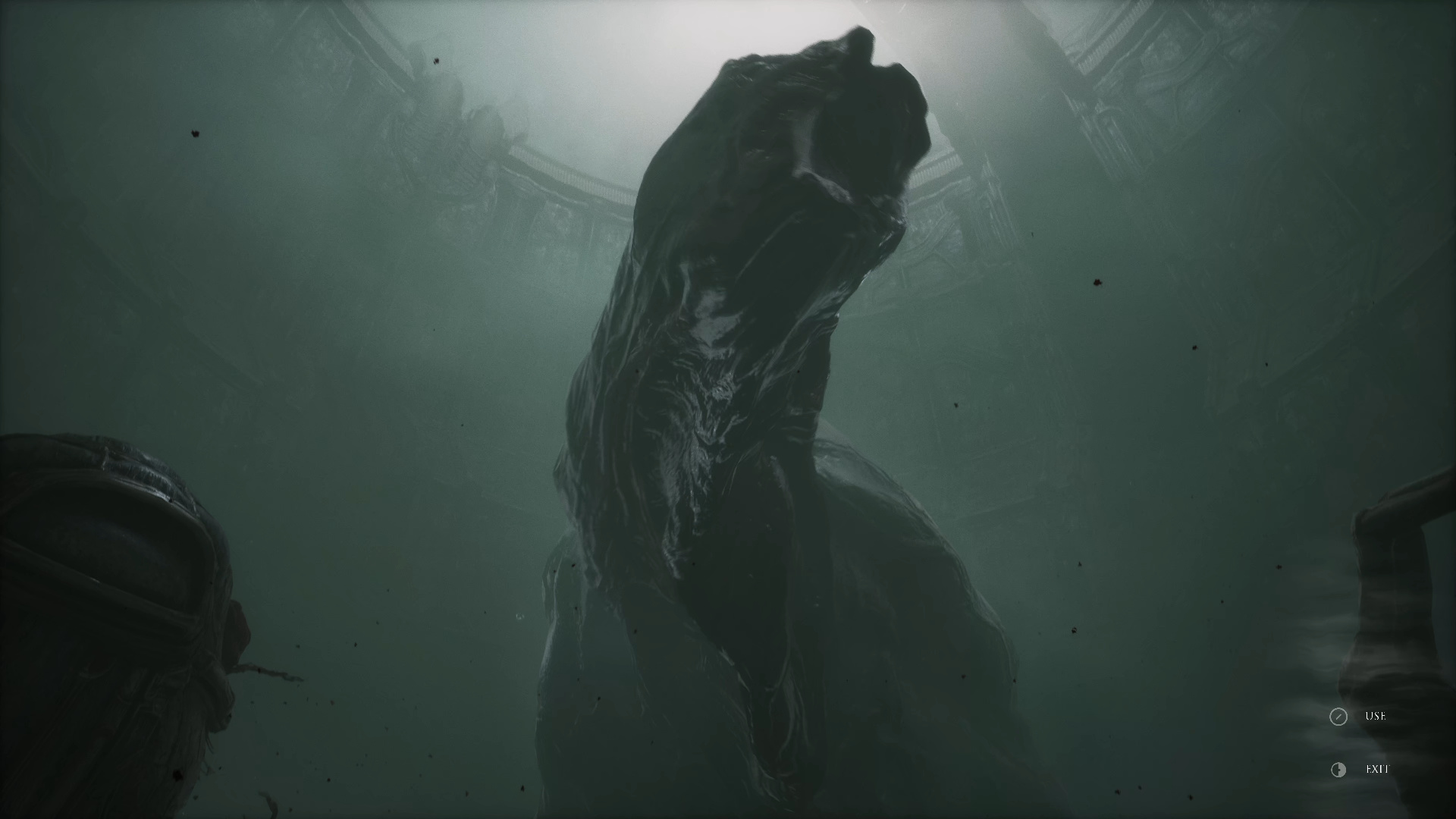 Howdy hidey ho!  This is one of those games that catches my eye by looking so radically different than what’s on the market.  There is an irony in me saying that, of course: it’s clear its muse is H.R. Giger.  However, the game has been very cryptic in its showings, but the power of Game Pass compels me.  What is Scorn and can it truly stand on its own?

…more of an interactive adventure than anything else.

Warnings always come first: much like my review of Stray, Scorn is more of an interactive adventure than anything else.  In addition, if you liked Elden Ring, then you’ll love the fact that there are no tutorials, no guidance, absolutely nothing except you and your wits.  You’ll do a lot of exploration and pulling of switches to solve environmental puzzles as a result.  It’s a purposely slow pace, one that tries to dot itself with this little thing called “combat”.  And right there, unfortunately, is its biggest weakness: while there are different weapons, the combat just feels needlessly sluggish.  It feels very much like an afterthought added in the late stages of development as a way to keep things interesting.  Naturally, if you drudge passed that, there are more puzzles.  And that’s the cycle: figure out your way through the labyrinth between puzzles and not dying.  This is definitely not a game for people who want action, this is a game for people who want mystery and exploration.

It doesn’t take too long, either: somewhere between 5-6 hours will see you through to the end.  This is also pretty much a single playthrough, so you’re not going to get much more out of it other than to maybe show it off to your friends (more on that in the presentation section).  It’s a one-and-done, but fortunately it’s priced a little lower to compensate.  At first, then, it’s $40 price tag outside of Game Pass might seem steep, but as you go along through the game, you do realize where the hard work actually went…

…I can confidently say that the art designers deserve to stand proud of their hard work.

I actually appreciate H.R. Giger’s work.  I think it takes being a bit “mental” to pull off the designs he did, and this is why not only is there a museum dedicated to his art style, but it’ll be the first comparison you and anyone else makes.  And in this lies probably THE masterclass love letter of this game.  The environmental design is unmatched, the art style is absolute peak, the visual horror is simply grotesque, and I’m absolutely gushing at this.  And I would put money on it that H.R. Giger would absolutely be gushing over it, too.  It is an incomparably dark beauty in a gaming world of bright colors, family friendly art styles, and worlds designed to be visually appealing.  I will NOT soon forget this game simply because I think they did such an astounding job creating this exotic world, and I can confidently say that the art designers deserve to stand proud of their hard work.  I just have not been THIS engrossed by a game’s art style in a very, VERY long time.  Sadly, this does not carry into my curiosity which was not satiated anywhere close to the way the art style does.  The game has two cinematics, no dialogue, nothing written, nada: the entire thing is left up to you to interpret.  Which would be fine if there weren’t still so many unnecessary questions, though I still managed to piece the story together anyway.  In such an engrossing world, the one thing they forgot was how to better use visual evidence to explain it.  But I’m willing to give you a hint and it’s right in the intro: these two viewpoints are NOT the same person.  One is you, and one is your antagonist.

…this game WILL be underappreciated…

This was a VERY tough game to review.  No, it’s not because of the uninspired combat; no, it’s not because of the lack of replayability or the purposely convoluted world lore and story.  It’s because I know this game can only appeal to the most distinct of people who possess an open mind that is steeled enough by strength of imagination to weather this type of darkness.  What I mean is, this game WILL be underappreciated for being so out-of-the-norm and so hard to mentally stomach by the vast majority.  Sure, it has those major flaws that I’ve very clearly stated, but this game truly stands on its own in the art style department at a level no one has come anywhere close to.  H.R. Giger would be proud.